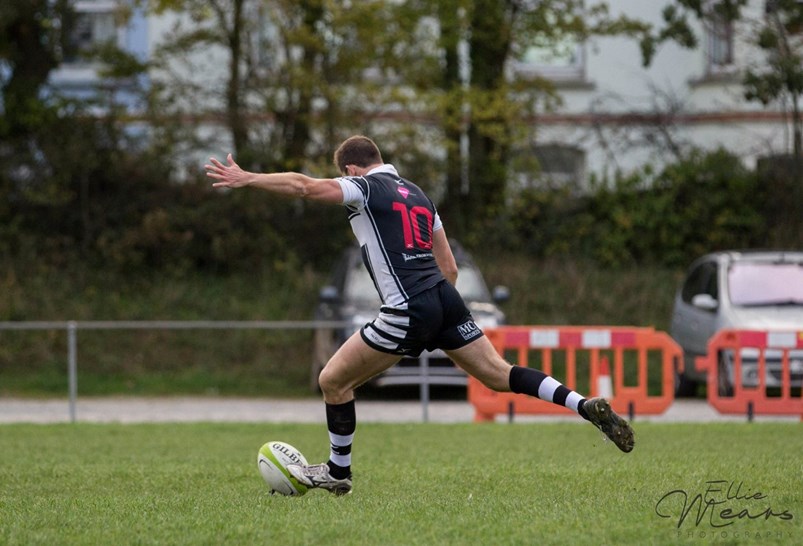 Statement day, this was how Falmouth saw this clash against title rivals Paignton. January will define the Eagle's season, with 4 decisive fixtures, Lanner were put away last weekend but Paignton sat in second place and without their 10 point deduction would have been top of the table, their single league defeat being to Falmouth earlier in the season.

The Eagles delivered their performance of the season so far, with a show of intent, catching the visitors cold at the start of the match and then strangling Paignton, through an outstanding defensive display and preventing the visitors from scoring a single point, while scoring 6 tries of their own.

Falmouth without skipper and Justyn Irons, Jamie Caruana stepping into the breach, Owen Hambly returned to the back row and Simon Bailey to the bench.

Playing with the conditions, the prolific Dan Hubble opened the scoring, from a Falmouth scrum, Paignton focused all their team effort on dismantling the Falmouth pack, a retreating Tom Simmons at 8 produced the perfect counter punch, picking up, with an open field in front of him, to feed Hubble to score in the corner.

Simmons then scored, spotting a gap on the at a ruck, he ran in from 20 meters. Paignton regathered themselves, attempting to drive through the midfield but constantly driven back behind the gain line by a Falmouth defence verging on the maniacal. The Eagles attitude exemplified when the visitors decided to turn down a simple penalty kick, choosing an attacking , their drive was stopped, pushed back and then found 5 phases of play when they were driven backwards in every tackle, eventually conceding a penalty. Falmouth celebrating the decision as if they had scored a try.

At halftime, the game was still in the balance, the Eagles had missed a couple of opportunities at the end of the first period and with the wind behind them Paignton were in the hunt but the Eagles were determined not just to defend their lead but to win the half and the match, Trevor Ward opening the scoring following a penalty and a series of drives to the Visitors line.

Tom Spiller sealed the win and the bonus point on the hour, following great play from the game's outstanding players, Simmons and Hubble. The number 8 breaking off a scrum, finding Hubble who rounded his opposite number and gave Spiller the run in.

Falmouth stuck to their game plan and retained their composure, while Paignton had evidently lost theirs, choosing to kick a penalty when 20 points in arrears, instead of punting to the corner. The kick fell short, the Paignton coaching team furious. Simmons, then produced a tackle, when it seemed certain that Paignton would score. Frustrated and driven back in contact time after time, the visitors were reduced to kicking downfield hoping for Falmouth errors.

From defence Falmouth countered, David Jones, weaving up in a break, the Eagles pushed deep into the visitors 22, from a scrum Simon Bailey drove forward and offloaded to Tom Edmonds to score, Edmonds adding his first conversion. The scoring was completed by Jon Baglow, with a drive to the line following a break by Ben , Edmonds converting.

An outstanding performance by Falmouth which leaves them 9 points clear at the top of the Cornwall and Devon league, with a game in hand. They have no time to relax as they next face rivals Penryn, at the Memorial Ground, who will want nothing more than to derail the Eagles.