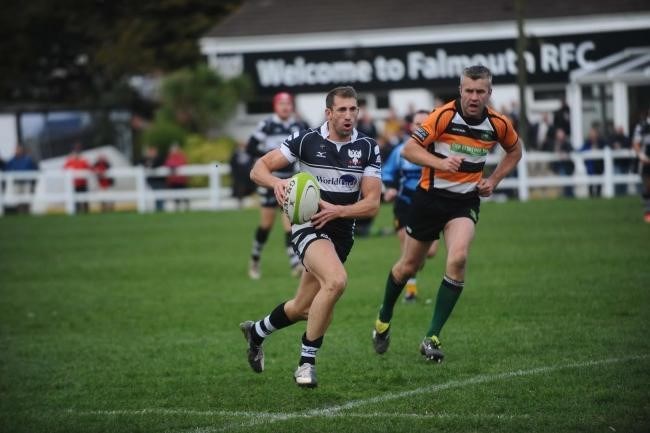 Falmouth Eagles continued their impressive start to the season in recording a seventh straight win and a bonus point against Plymouth Argaum. Graham Whitmore was nervous prior to the game that his team might struggle for motivation as this match came on the back of local derbies against Penryn and Pirates Amateurs, which had both been high octane encounters.

Whitmore needn't have worried as Falmouth strung together their finest 40 minutes of the season in an outstanding first half, which saw the Eagles score four tries, conceding nothing, securing the bonus point and racking up a 29 point lead.

The Eagles controlled proceedings from the off, David Jones and Mark making dangerous breaks before full back Tom Edmonds opened the account with a dart into the corner, Justyn Irons converting. Irons added a penalty before Ben scored the try of the match running in from the halfway line bewildering the defence with his mazy running, Irons with extras.

In complete control, Falmouth outstanding, with continual attacks entertaining the crowd, Owen Hambly scored a third try after Olly Church unselfishly gave the scoring pass when he could have scored. The bonus point was secured after Tom Simmons was held a yard short of the line, from the following scrum, replacement wing Seb Firth stepped past his opposite number.

The tie was effectively over and Falmouth out whatever doubt there was in the first minutes of the second period as Justyn Irons fired a pass, across the face of the defence, to Seb Firth to touch down for his second.

could have collapsed but marshalled themselves superbly and dominated for fifteen minutes. Full back Ally Murray leading the way, firstly showing total commitment when claiming a bouncing ball, in the face of the Falmouth attack, to kick forward and score, converting his own try and adding a penalty as Argaum tested the Eagles.

While Falmouth never at risk of losing, this was a test for their defence which generally held strong. The Eagles were of a sucker punch as Simon Bailey, breaking upfield, had the ball stolen from his grip just as he was about to pass, the visitors quickly counterattacking and scoring in the corner, as most of the Falmouth side were still looking to join the attack.

Needing to reassert dominance Falmouth brought on their replacements and the fresh legs brought back some impetus, Ackner scoring his second, under the posts with a smooth move of the back of a scrum, Irons converting to extend the lead to 28 points.

Whitmore reflected after the game, that winning was becoming a habit, the first half had seen some of the best rugby Falmouth had played all season but he was equally pleased with the way the team had refocused on their defence in the second period.

Next week the Eagles face a serious challenge to their unbeaten record with a tricky visit to Plymstock Albion Oaks.

Man of the match was Ben - John Lawrie from our sponsor Hine Downing presenting the award.

To see the post-match video footage, please click on the following link: https://vimeo.com/188450080