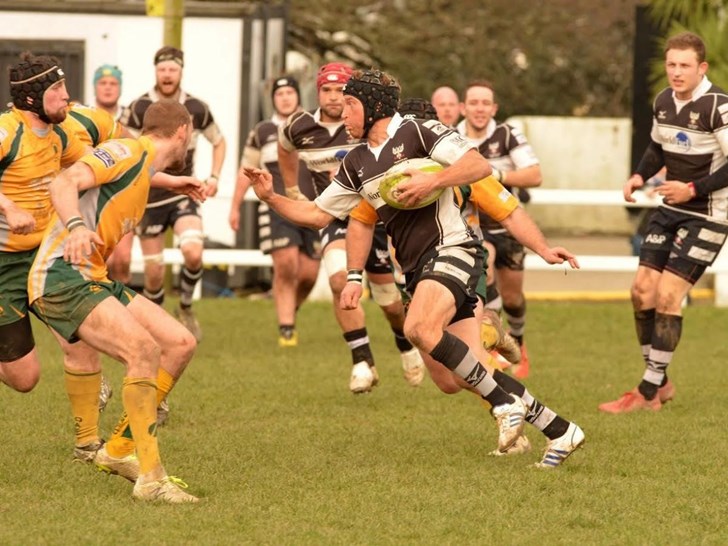 The Eagles were out for revenge, the Oaks had inflicted on Falmouth their only league defeat of the campaign so far and the team was determined to make up for the stain on their record, a demolition was the result.

Dan Hubble stole the show with five tries as Falmouth continued their excellent run of form picking up a bonus point which keeps them clear at the top of the Cornwall and Devon league.

The Eagles started with an early try when a good carry by Justyn Irons opened space for Dan Hubble and he darted in for his first try of the day.

After Plymstock’s poor start they pushed back and forced their way back into the match when they were awarded a penalty for 3 points.

Falmouth instantly went on the attack again with Hubble turning from scorer to provider when picking up a kick through and offloading to fullback Seb Firth for a try. Justyn Irons with the conversion.

The hosts were guilty of conceding too many penalties, eight in the first 20 minutes and Oaks Tim West made the most of his opportunity by converting another, to just keep the visitors in the match.

Graham Whitmore called for the team to go back to their patterns and trust their normal game and this worked to good effect for the remainder of the half as the mistakes became fewer, and penalties stopped being conceded.

Matt Brewer on the flank, was pivotal to the improvement, linking play between forwards and back and making some  breaks. Tom Spiller got the Eagles third score, picking up a ball from the back of a and diving under the

Hubble then scored two tries in quick succession to extend Falmouth’s lead before the break. The first coming from a strong run from for Hubble to scramble over for the bonus point. The second coming off the back of a poor lineout from Plymstock, Falmouth quickly moved the ball and the deadly Hubble soared to the line for his third try.

Hubble started the second half as he finished the first with a delightful step to evade his man and score another try.

Falmouth dominant in all areas of the game and a turnover produced an attack through Hubble, via Trevelyan Ward to Jon Baglow who cantered for a rare try. Baglow was delighted with his try; " I don’t score often but it was great to get amongst the tries, a great team performance."

The game was wrapped up with a fifth and final try by Hubble, as he darted to the line to score after a superb backhand pass by David Jones. Irons converted.

Chairman James Instance was pleased with the result; "you would say points to six is a fantastic win but we've been performing like that at home all season. For Dan Hubble to get five tries is brilliant. But there are areas we could improve."

"The next match is against Tamar Saracens who have produced one win all season. You've got to be confident, we have some injury problems but we have depth. I am confident we can get a result."