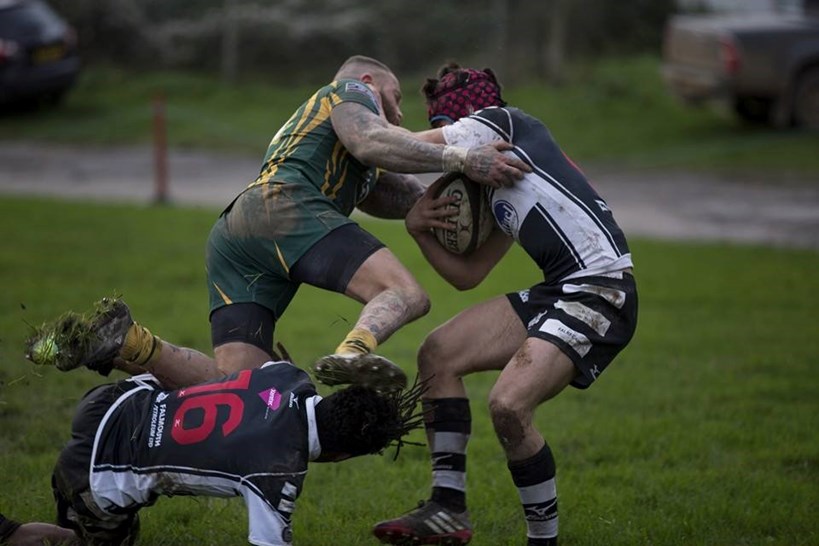 Travelling across the Tamar became a real issue for Falmouth last season when they recorded only one victory in eight attempts but that hoodoo ended as Falmouth backed up last week’s opening day success over Topsham with an encouraging bonus point win away at Honiton.

Starting the match with the advantage of a sizable slope and wind, Justyn Irons put the Eagles ahead with an early penalty, Honiton replying with a penalty from centre Ollie Hyland.

Dangerous with the ball in hand and threatening outside, Falmouth regained the lead when Tom Edmonds was put into space on the opposition 22 by Nick Carne and stepped past two defenders to dot down, Irons adding the extras, Honiton kept in contact as Hyland converted his second penalty.

The Eagles had control in the line out and varied their options throughout, Honiton could not guess where the next attack was coming from and Falmouth capitalised with an audacious catch and drive from 30 metres out, the maul was illegally brought down short of the line but playing advantage Justyn Irons cut through the Honiton defence to score and lead at halftime 15 points to 6.

An area of equal concern and hope lies in the Eagles ability to create chances, Kindjarsky and Irons both created clear opportunities but a misjudged kick and knock on cost the score, then prop Brad Cock made a startling 30 metre break, that looked assured to produce a try, only for the final pass to Tom Spiller to go astray. These chances need to be converted into scores, particularly when the Eagles play stronger teams and opportunities are less common.

Honiton's game plan was to keep the score down in the first half and use the slope and wind to kick to the corner and claw back points. The Eagles starting conceding penalties and Hyland demonstrated his kicking ability, single handedly keeping Honiton in the match with a series of successful long range kicks as momentum and territory began to move in the hosts favour.

Breaking out of defence Nick Carne seemed to have given Falmouth a vital try but celebrations were cut short as Honiton claimed that the linesman had raised his flag, stopping them from playing. The linesman confirmed he had raised his flag but for a Honiton knock on but the try was disallowed, concern grew that 'Flag gate' would cost Falmouth victory.

Honiton remained in contention as Falmouth's penalty count rose and the Eagles were beginning to look vulnerable when an 'old head' came into his own. Honiton secured a line out but Steve Instance, managed to dislodge the ball from their grip, from the turnover and with the defence scattered, Justyn Irons broke through to score and convert his own try, extending the lead to 22 - 12, Hyland soon reducing the arrears to seven soon after, with the final of his five penalties, to keep Honiton in the hunt.

Falmouth dug deep to secure this rare Devon success and in the last 5 minutes, Owen Hambly, who had a fine game, popped up on the shoulder of Tom Spiller to muscle over for a score, Irons converting and to add icing to the cake, from the resulting kick off, the ball was moved from deep and Nick Carne, making up for his earlier miss, added Falmouth's fifth, Irons securing the conversion, for a final score of 34-15.