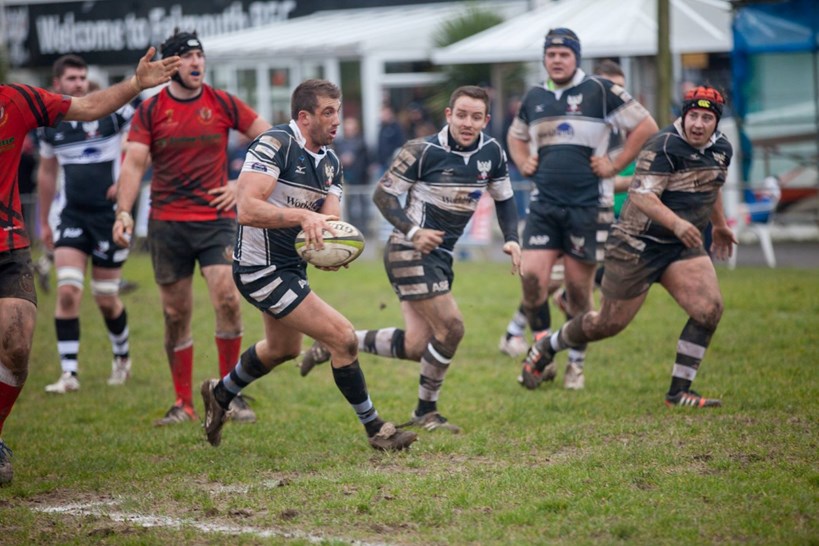 Falmouth Eagles recorded a rare victory at the Mennaye Field on Saturday in a performance marked by resolute defence and taking their chances when they arose as opposed to a Pirates team who had the majority of territory but outside of Rhodri McAtee couldn’t deliver an end result.

The Amateurs had overtaken Falmouth in the league but came into this match on the back of a defeat to Bodmin and disruption in training meant they looked out of sorts.

Things got off to a terrible start for the Eagles when centre David Jones limped off with an ankle injury after ten minutes, then Pirates Fly Half Jimmy Trezise, put the home side 3 points ahead with a penalty after Falmouth were punished for holding on in the tackle.

To their credit the Eagles were unfazed and replied with the first try of the game, with number 8 Tom Simmons backing up a break from scrum half Tom Spiller to cross the line.

Falmouth at this stage were the more attacking side looking to run from all over the park, a speculative kick ahead was knocked on by Pirates full back presenting the Eagles with a great field position, Simmons picked up, linking with Spiller who found Alex Kindjarsky running at full pace on his shoulder, bursting through to score, Justyn Irons converting for a 12 – 3 lead.

When momentum is in your favour you need to keep your foot on the gas and Falmouth had one more golden opportunity in this 10 minute period of dominance but spurned a 3 man overlap as the move fizzled out and Pirates began to take control.

Jimmy Trezise pushed a kick deep into Falmouth territory as the Pirates heaped on the pressure with a series of scrums close to the Eagles line, the Amateurs were resisted by a determined Falmouth defence, Alex Kindjarsky throwing himself into tackle after tackle on Steve Evans, whose low centre of gravity makes him a difficult opponent to stop.

Eventually the pressure told, Falmouth conceded a penalty and Rhodri McAtee took a quick tap and darted in to score, Trezise failing with the conversion but the restart at last gave the Eagles the chance to escape from their own 22 and Irons was presented with an opportunity to increase the lead at the end of the half but pushed his penalty kick wide.

With the wind slightly in their favour the Eagles sought to gain territorial advantage in the second period and began brightly but over complicated a backs move in the midfield allowing the hosts to clear their lines. From this position the Pirates generated an opportunity from another tap penalty but to the Eagles relief a wayward pass was intercepted by wing Mark Lea who strolled 60 metres to score, Irons converting.

The try seemed to have broken Pirates spirits but Rhodri McAtee brought the result back into balance as he took advantage of some rare weak Falmouth tackling to score his second, Trezise converting.

Again the kick off gave the Eagles the chance of securing some territorial advantage and another Irons penalty brought 3 points for the visitors. Trevor Ward chose the restart to make his mark on the match with an outstanding take of the ball allowing Falmouth to clear the ball downfield, from the resulting line out Irons struck a drop goal to increase the lead further.

The match entered the final quarter with Pirates camped in Falmouth’s 22 but every time they looked certain to take advantage the Eagles forced a scrum or lineout turnover to disrupt the Amateurs but could never quite fully clear the danger.

With players on both sides striving for any advantage, it meant the 31st person on the field, referee Al Denham, had the greatest say in the final minutes as every tackle, scrum, line out, ruck and maul held the possibility of a penalty for either team and every decision was contested by opposing spectators. Falmouth eventually falling foul once too often and conceding a penalty try, adjudged to have deliberately knocked on a pass destined for a Pirate with no one to beat, Trezise converting, to bring the hosts within 3 points.

With seconds left Falmouth from a downfield penalty clearance gave Irons the chance of another drop goal but on receiving a wayward pass he made a run to his right hand side, finding replacement wing Luke Raith who touched down in the corner, securing the bonus point and the win.

Next week Falmouth travel away to Tavistock.