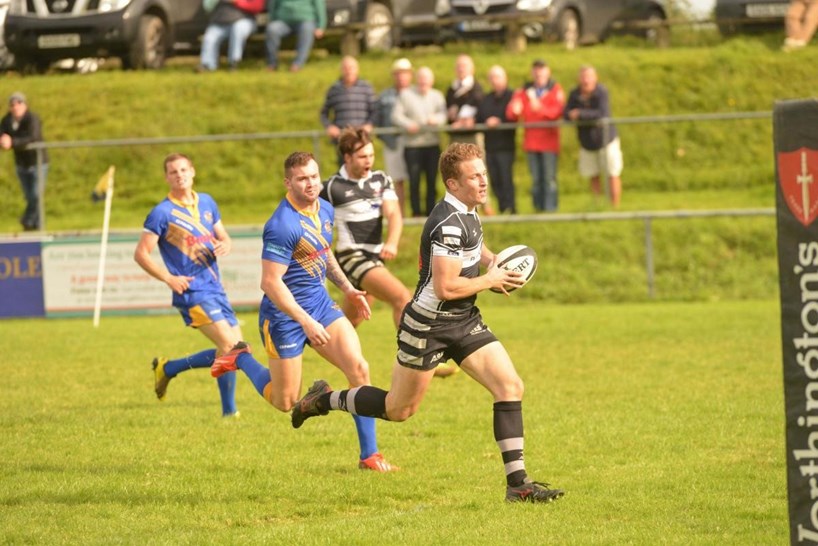 A breath-taking second half comeback brought home the victory for Falmouth against local rivals Truro in the Tribute Western Counties West league.

An 80th minute try from Lee Humphreys completed the Falmouth turnaround from 17-3 down at the break to 22-17 at fulltime.

Director of rugby Graham Whitmore said after the game: “The boys are overjoyed and I think they got what they thoroughly deserved.

“They showed great resilience and great character and ultimately we got the rub of the green in the end.”

Truro began the game in the ascendency and scored in the 8th minute after the home team’s forwards bundled the ball over the line to open the scoring at 5-0, however Ethan Tyler couldn’t convert.

Falmouth put their own points on the board soon after through captain and ex-Truro player Justyn Irons, who converted a penalty in the 28th minute.

But the home side hit back almost immediately, after Jack Heazelton burst through the Falmouth ranks, before offloading to the Truro centre who scored just to the right of the posts. Ethan Tyler converted this time to make it 12-3.

Tyler played his part in Truro’s third score, this time with the try in the 37th minute after another Heazelton break through, but Tyler could not convert leaving the scores at 17-3.

Falmouth were not defeated and showed great fighting spirit straight after the break when Tom Edmonds was held up on the line after a great run from Matt Brewer.

Only five minutes later and Falmouth collected their first try of the game, Edmonds this time managed to score after a superb run through the Truro defence to narrow the score to 17-10 after Irons converted.

Truro then found themselves down to 14 after Sam Rhodes was sin-binned for a headbutt.

Falmouth took advantage of the man extra and completed their comeback 2 minutes later through Tim Gay after the Eagles won their own lineout and heaved the ball over the line to even the scores at 17-17.

The away side weren’t finished there in what was an exhilarating finish to a tight contest.

With the very last play of the game Brewer broke through the home defence before passing to Matt Poole who superbly offloaded to Humphrey, just before going into touch, for him to score to the very left of the posts and give Falmouth their second win in a row.